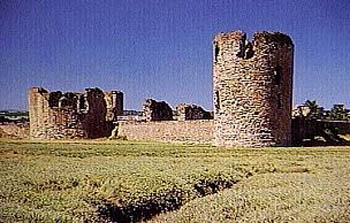 Flint Castle, in the town of Flint shire, in northeast Wales, is an Edward I stronghold which provides us with an image of desolation and solitude and distinctly reminds us of the prominent contrast between the modern world and the Middle Ages. It is yet another architectural masterpiece created by Edward I's master mason, James of St. George.

When construction of Flint was begun in early 1277, tremendous numbers of laborers were recruited from throughout England to work on the structure, reaching in numbers to over 2,300 by the fall of that year. Not only was the new castle created, but a surrounding town was also established. In fact, the original medieval street plan is still visible today at Flint. Such towns were very useful to rulers of the time, allowing a source of control and revenue. 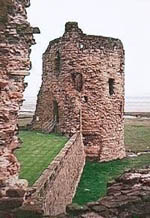 Even though Flint is in ruin today, much of it remains as it appeared in the 13th century. It was basically square in design with round angled towers on three corners and a huge donjon (below ground-level keep) on the fourth corner.  The northern and eastern walls present against the Dee estuary while ditching and an outer bailey reinforce the security needs from the other two walls. The ditching once held the tidal waters of the Dee and served well as an opposition to unwanted intrusion.

Entry into the castle was a drawbridge, which has now been replaced by a footbridge; but the original footholds of the drawbridge can be clearly seen.  The bridge crosses a ditch which was originally about 20 feet deep, separating the south curtain wall and the southwest tower from the outer bailey. With two sides butting up to the Dee and the depth and width of the ditching, Flint was incredibly accessible by sea.

The gatehouse into the inner bailey was quite majestic in its day, but today is not more than ruins.  However an archway and the porter's lodge are still visible.  Inside the gateway, the castle was guarded with large heavy double doors and a portcullis.  Once inside the inner bailey, the ground is somewhat soft and marshy similar to that on the outside.  This would have made for a quite moist floor for the daily activities of the castle dwellers and workers.

Of the three angle towers guarding the inner bailey, the most complete is the largest one in the northeast corner facing the Wirral peninsula. The three-story towers with their spiral staircases, windows, fireplaces, drawbar holes, and embrasures for arrow slits lead the belief that they were not only used for defense but also as living quarters.

The curtain walls contained strong battlements.  The southern wall had several s5trategically placed embrasures facing the outer bailey, and a wall walk connecting the towers and latrines.  The northern and southwestern walls have visible signs of modifications to the structures for a dock and for mooring ships. Seemingly large portions of the walls most likely supported wooden buildings and structures which were used for dwelling.  These and most of the curtain walls have fallen, but it is easy to discern that these walls would have been a solid defense to the castle's interior.

Probably the most impressive building at Flint is the great keep which stands alone and is separated from the main castle.  It was a self-sufficient stronghold with it's own moat, drawbridge, and basement. It was quite a formidable building and a strong stand in defense of the castle grounds.

Construction of Flint Castle was not really completed until 1284, the same year the town received its royal charter. The castle saw its first action in 1282 when it was besieged by Dafydd ap Gruffydd who did not prevail. Another attempt was made in 1294 when the English constable purposely burned the castle and the town to prevent capture by the Welsh.  Extensive repairs were made before the castle was turned over to Edward, Prince of Wales,  in 1301. It's final significant action was seen in the 1640's during the English Civil War when the fortress was used as a base for the regrouping and besieging of the Royalist stronghold at Chester.  Flint itself was besieged for three months and surrendered to the Parliamentarians, led by General Mytton.  In 1647, Flint was effectively made useless by Cromwell's decree of devastation.

Although in ruins, if you use a little imagination, the architecture of Flint Castle is still magnificent, and her history is as colorful and interesting as many of the other better-known European castles.

This article may be reprinted  in your local SCA newsletter as long as you reprint it in it's entirety, credit the author, and send the author a copy of the printed document in which their article was reprinted. Email the Web Minister for more information.