Caerphilly Castle which is located in the town center of Caerphilly, South Wales is one of the most well known castles in all of Wales.  It's enormous size combined with the complexity of its land and water defenses draw much interest from both history mavens and castle buffs.  It spans about 30 acres and is a prime example o the might of medieval military architecture.

The site's strategic qualities were first recognized by the Romans during their military conquest  of southeast Wales.  In 75 AD, the Romans built a fort for about 500 auxiliary soldiers in Caerphilly, but abandoned it 50 years later.  During the Norman invasion in the 11th century, the site was left to the Welsh. The conquerors were more focused on the fertile coastal plains and left the mountainous uplands alone.  For nearly 200 years, Caerphilly Mountain served as a geographical barrier between the Welsh and the Anglo-Normans.

However, in the 1260's, the minor native lords of upland Glamorgan found themselves caught in the web of national politics.  The ambitious last Welsh Prince of Wales, Llywelyn ap Gruffudd, was in control of Breconshire to the north and was poised to move further south.  But Gilbert de Clare, the powerful Marcher lord, was determined to avoid such a catastrophe and rapidly moved north in 1267 where he captured the native ruler of the Caerphilly site, Gruffudd ap Rhys. The following year, he began construction of Caerphilly itself.

In 1270, Llwelyn attacked and burned the castle shortly after construction of it's formidable defenses had begun.  This created such a stirring that a full scale war was only avoided through skillful negotiation and the intervention of King Henry III.  Llwelyn withdrew from Caerphilly and it was re-occupied by de Clare in 1271 at which time construction was resumed.   In 1291, de Clare died; and construction of Caerphilly was continued by his son, another Gilbert.

Caerphilly was built in a concentric design with successive defense lines set one inside the other.  If an attacker forced his way through the first line of defense, he would find himself faced with a second. This defense system was fully utilized later in Edward I's great castles in North Wales.

The first line of defense against any attack was the outer moat, spanned by two drawbridges, and backed by a huge curtain wall and gatehouse.  The lakes which surround Caerphilly made it almost impossible to utilize the standard methods of siege warfare.  Stone hurling catapults could not be brought within range; siege ladders were useless from such a great distance; and tunnelling under the water to undermine the walls was completely impractical.

The second line of defense was the inner moat and gatehouses of the outer ward. These defenses were fairly common, but at Caerphilly, due to the first line of defense, they were more difficult to overcome.  Nothing short of building a boat would allow siege engines and ladders to even get near this line of defense.  That withstanding, there was still a third defense line.

At the very center of the Caerphilly location, was the third and final defense - the inner ward.  The inner ward was a very large quadrangle which was enclosed by four curtain walls and enforced with massive towers on each of the corners and additional gatehouses on the east and west sides.  The gatehouses served as bases for protecting the points of entry and could be shut off and held separately in the event that the rest of the castle were to be overcome.  The east gatehouse, containing the constable's hall and other accommodations, is the largest and seemed as though it could be quite self-sufficient if the need arose.  This entire design set a pattern which was later adopted by Edward I at Harlech and Beaumaris.

Caerphilly was eventually passed from the de Clares to the Despensers.  Under their rule, in 1316, Caerphilly was attacked during the revolt of Llywelyn Bren.  It is very likely that Caerphilly saw further action during the Welsh Civil War, but details are not clear enough to be sure.
Although de Clare must have planned an incredible and mighty fortress, it is doubtful that he had any conception of how large and elaborate the completed structure would be. Caerphilly, whether seen mirrored in the protective waters that surround it or ominously rising from the early morning Welsh mists, is the epitome of strategic medieval architectural design. 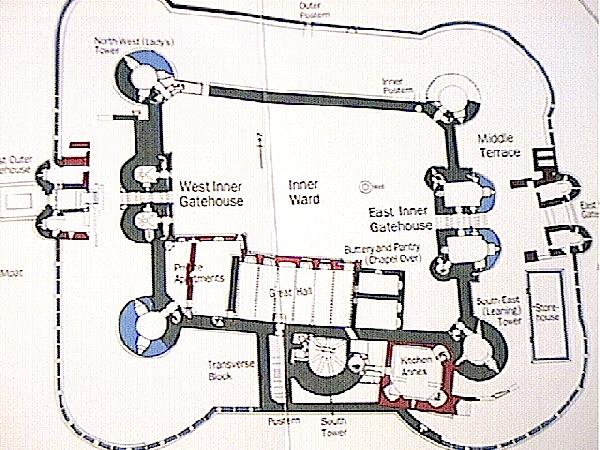 This article may be reprinted  in your local SCA newsletter as long as you reprint it in it's entirety, credit the author, and send the author a copy of the printed document in which their article was reprinted. Email the Web Minister for more information.